Yes, this will be a post all about baby.  So move along if that’s not your thing.

We are doing well in the Finn household.  We seem to have somewhat of a routine down which has greatly helped the sleeping schedules of all involved.  Sami is now sleeping in her crib at night!  Can I get an “amen” to that puh-lease?  Thank you.  She goes down around 7:30-8:00 pm and sleeps until anywhere between 2:30-4:00 am.  Then it’s up for a feeding, diaper change and back to bed till 7:00ish, although this morning she slept till 8:45.  This is great as it means whoever has baby duty only has to get up once during ungodly hours.  However, I am having trouble timing the arrival at day care…

Oh yeah, did I mention Sami got a spot at the day care of my employer?  This is great because I will be able to pop over to see her during my lunch hour and she will only be about five minutes away from me at work.  We have been taking her to day care for a few hours each day for the past week or so but the earliest I’ve managed to get her there has been 9:00.  Not good.  I need to shave an hour and a half off my time to get to work at 8:00.  I go back to work on Wednesday (that’s a whole ‘nother post) so will attempt to get her there by 7:30 on Monday and Tuesday as practice runs so I can time traffic.  But anyway.  She’s doing really well there and I think is getting used to the teachers and the noisiness of a classroom with seven other babies in it.  Everything is very well organized, clean, and I like the caregivers.  I also like the daily reports I get on what time and how much she ate during the day and the diaper reports.  Only a mother looks forward to reading about how many wet or poopy diapers her kid had while she was away from her during the day.  Heaven help me.  The classroom is very colorful and visually stimulating, which Sami loves; she laughs hysterically at the ceiling fans.  So since right now I have no other option but to put her in day care, I think this is going to work out to be the best case scenario and I’m thinking it will make it easier for her to go to school later on what with all the social interaction she’ll be getting at day care from this early get-go.

Sami and I made the journey to my parent’s house this past weekend.  She did fairly well in the car although I did have to sing “She’ll Be Comin’ Round the Mountain” about twenty times to calm her during particularly fussy moments.  She loves that song for some reason.  I need to make up some more verses for it though.  We spent some time with the fam and ventured to both grandparents for a bit as well.  Sam had a major freak out at grandma’s (you can read more about that and the weekend visit at Scout’s place) so we had to make a hasty get-away.  I think she was burning up.  What is it with elderly folks and not turning on the AC?  I was sweating the proverbial bullets myself and between that and getting in and out of the car seat one too many times, she had had enough.  She did sleep most of the trip home and pretty much was passed out till morning.  Me too actually.  It was a long day but a nice one spent with family even if I had to clarify Sami’s gender with my grandpa when he asked “is this one a girl”?  Sigh.  Personally, I think he has too many great-grandkids to keep up with so boy or girl, it’s all the same.

Here’s a Sami montage for ya….she’s smiling more and more and cooing at us.  So dang cute ain’t it? 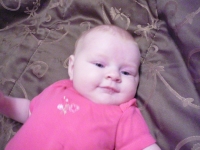