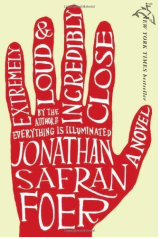 Just finished Extremely Loud and Incredibly Close by Jonathan Safran Foer. I’d tried it once, dropped it, and then picked it up again a few months later. I gave it 5 stars. Its been a while since a book has made me cry and this one did towards the end. Not that it’s exactly difficult to make me cry, but for a book to do so, that’s a feat. I thought the author aptly captured the perspective of a 9 year old boy who had lost his father in 9/11. Interwoven with drama between Oskar’s grandmother and grandfather years before in Dresden and later, in New York, the story unfolds in a heart wrenching, personal tale of a boy searching for something. Closure maybe. Forgiveness perhaps. An excellent read. Thus, my review.

Next up is Let’s Pretend This Never Happened by Jenny Lawson and It Starts with Food by Dallas and Melissa Hartwig.