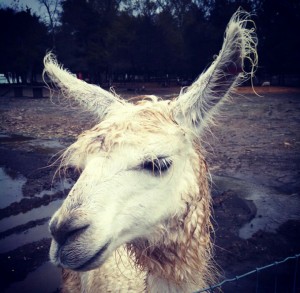 Random…Here’s a photo I took of a llama…Or an alpaca…Some sort of camelid anyway. I think he/she is pretty cool…yep, so very random.

This blog y’all…I neglect it for long periods of time because I get confused about what to do with it…what I want it to be…how I want to frame things here. And then I think too much, get overwhelmed and ignore it. Because crazy person.

But I’m popping in tonight for what its worth. Here’s a mini update on the life of Finn…so many things…deep breath and here we go…I bailed on the 1/2 marathon for a few reasons…I have however, been conned into doing a 5k in a few weeks with the sis-in-law who is WAY out of my league but it will be fun anyway…I have recovered from Paris and am ready to go on another trip as long as it doesn’t involve Delta airlines…As a matter of fact, I have a trip to Orlando planned for February (on Southwest, thank you very much)…Not a city that I’ve ever wanted to go to but this is a freebie and I’ll be accompanying my mom on her first flight so I imagine it will be an adventure….no, we are not going to Disney…I’ve been at the “new” job for 7+ months now and am finding it to be challenging…interpret that as you will…Kiddo is doing great and is one of the brightest lights in my life…I will never say she is “my world” because that is a huge pet peeve of mine when mom’s say that…what? you don’t have any other identity or life outside of motherhood?…to each her own…The Accountant is good…working his tail off as usual and keeping me off the ledge as best he can, poor guy…I still engage in desperate battles to keep the depression at bay and I still suck at making the bed in the mornings and keeping up with the laundry…we are getting a swimming pool and construction begins in January…I do not know how to swim but I expect our popularity within the neighborhood to increase exponentially…I made the absolute worst batch of guacamole the other day and I think it is still sitting all forlorn in the fridge…I should probably throw it out at some point…the hamster is still alive and keeping me awake at night until I get up and move her into a far flung corner of the house and shut the door…I am getting another tattoo at some point…I have the itch for new ink…I remain the biggest fan of the ellipsis…